The Strade Bianche is a road bicycle race in Tuscany, Central Italy, starting and finishing in Siena. First held in 2007, it is raced annually on the first or second Saturday of March. The name Strade Bianche (Italian for White Roads) stems from the historic white gravel roads in the Crete Senesi, which are a defining feature of the race. One third of the total race distance is raced on dirt roads, covering 63 km of strade bianche, spread over 11 sectors. The route consists of 184 kilometres over hilly terrain crossing the Crete Senesi in the central Tuscan province of Siena, including 11 sectors of gravel roads, totaling 63 km of dirt roads. The finish is on Siena's illustrious Piazza del Campo, after a steep and narrow climb on the roughly-paved Via Santa Caterina leading into the center of the medieval city. Since 2015, there is a women's race, the Strade Bianche Donne, serving as the opening event of the UCI Women's World Tour. It is held on the same day as the men's race, on the same roads but at a shorter distance. Some of the dirt roads are flat, other sections include steep climbs and winding descents, testing riders' climbing abilities and bike handling skills.

The white gravel roads, characteristic of the Tuscan countryside, provide the unique character of the race. They are usually country lanes and farm tracks, called strade bianche or sterrati in Italian, twisting through the hills and vineyards of the Chianti region. Some of the dirt roads are flat, other sections include steep climbs and winding descents, testing riders' climbing abilities and bike handling skills. Positioning and route knowledge often prove vital. The longest and most arduous sectors are the ones in Lucignano d’Asso, Asciano and Monte Sante Marie.

At kilometre 130 the endgame begins, shortly after Asciano, you reach the Monte Sante Marie climb gravel section. With 11.5 kilometres, the sector is arguably the toughest of all sterrati at the Strade Bianche. With a lot of uphill the strip also features some tricky descents. It is now named after Fabian Cancellara, triple winner of the Strade Bianche pro race; for 11 km, short climbs up to 15% alternate with flat parts where Spartacus could unleash his power.

Favourites of the latest editions are cyclo-cross superstars Wout van Aert and Mathieu van der Poel. They both have all the attributes required for this race: incredible strength, great climbing ability, terrific off-road skills and the ability to go it alone late and hold off a chase. 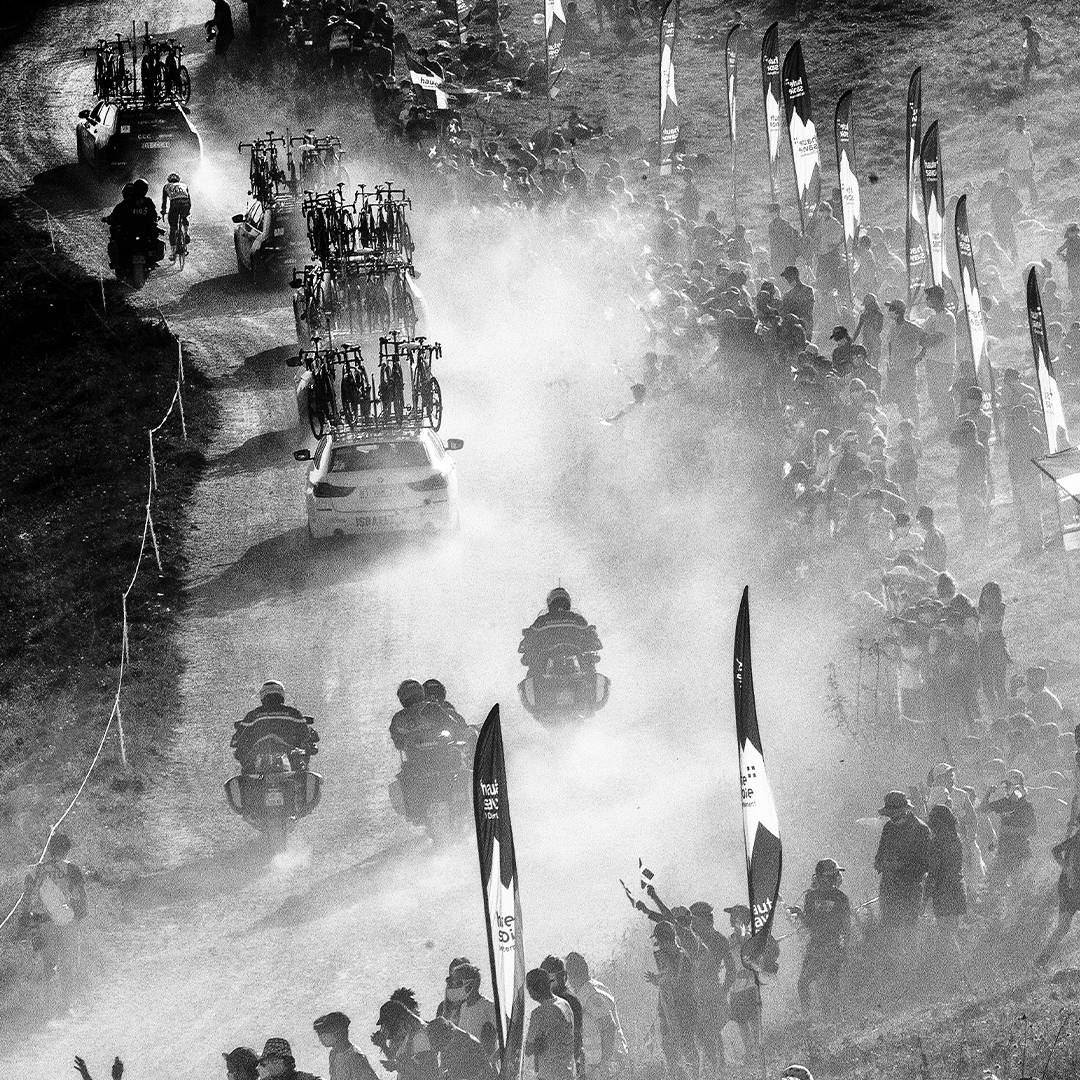 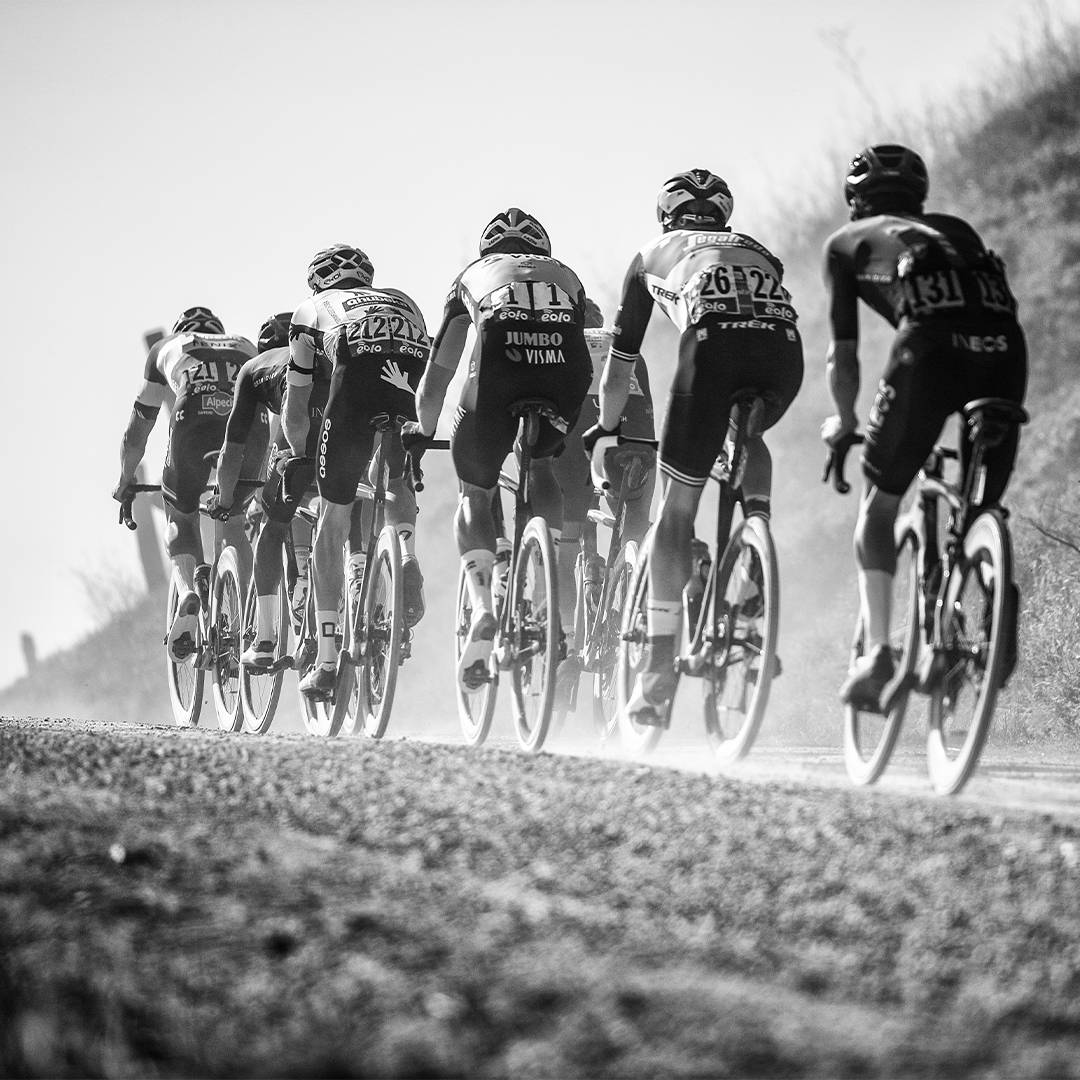 WHY DO WE LOVE STRADE BIANCHE?

In an epoch when the fever for competitive cycling and adventure riding have converged in the form of gravel racing, Strade Bianche resonates deeply with its signature white gravel roads paired with traditional tarmac racing. The route crosses ancient towns and ends in a devastating 18% climb to the finish that provides a visual spectacle on par with all of our sport’s best annual moments. The giants of the peloton come out and swing hard at Strade Bianche, fighting for the win in front of the cycling-mad tifosi, who pack the final kilometer and the spectacular finish chute in Siena’s town square. It is a race fit for kings, and in his final season, Fabian Cancellara proved why he has earned the crown of a classics legend. Swiss Fabian Cancellara holds the record with three wins.